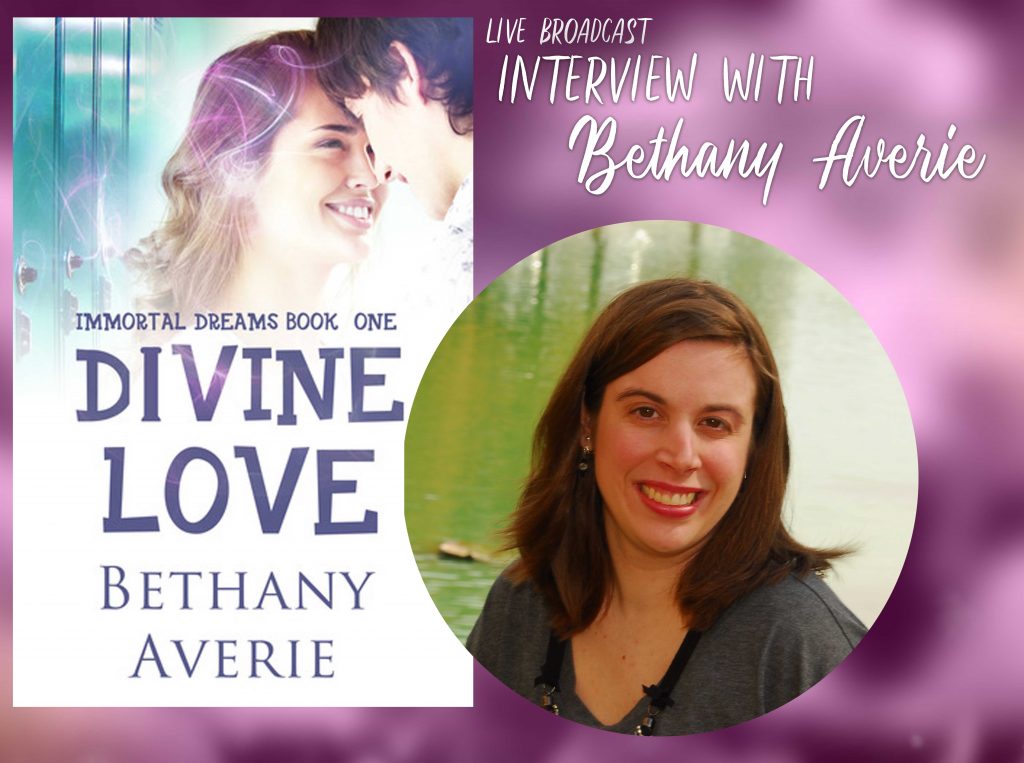 Have you ever wondered what would happen if mythological gods walked amoung us…like in our high school? Author Bethany Averie jumped into the world of immortals in her Immortal Dreams series, and she stopped by to tell us a little bit about her book and answer a few questions! Before we start, Bethany tells us about her book! “Divine Love is the beginning of the Immortal Dreams series. The line I often use is:  Laney thought her life was ordinary until Jason walks into her life. And of course, she finds out that Greek gods and goddesses (Immortals) are real.”

The Gold Fish jingle at the time was a popular thing (“I love fishes ’cause they’re so delicious…gonna go fishin’…”) and my friend, Sarah, and I would yell that to each other in the hallways in between classes. Yeah, we got some interesting looks for that. LOL

2. Laney is thrown into the world of the Immortals in the story. If you were to be ripped away from your own world and tossed into any other country on the planet, where would you hope it would be?

I guess it would be popular to say something like Greece or the Caribbean (both of which I do want to visit—I’ve been to St. Croix in the US Virgin Islands) but to be honest, my travel dreams have more to do with my background than where I’d go for a vacay. I’m part French-Canadian, Flemish(a type of Dutch), English, and German. I’ve been to Canada, so I’d want to go to England, Belgium, France, and Germany to see where my ancestors come from…way back when…I don’t know exactly when my ancestors came over to the USA, but I’m guessing it was probably in the 1800s.

If an Immortal came at me in the morning I’d tell them to shush until I’ve had my coffee. I have to tell my Offspring to be quiet until I’ve gotten the caffeine in me, so evening would be better. Although, if it’s Eris, I’d probably hide. That woman is seriously disturbed (if you go by how she is in my series!)

4. Suffering from the loss of someone she loves, Laney is having a hard time finding her direction in life. What is something that you’re constantly losing in your own life?

Besides my mind? Hmm…everything! I put things in safe places and forget where they are. I’d probably lose my head if it wasn’t attached to my body.

5. Your main character’s life does a one-eighty in the story. What’s your favorite degree for an angle other than one-eighty?

6. In the story, Laney literally walks into the hot new guy. If you could “accidentally” walk into one other YA author, who would it be?

Another YA author okay…ummm I have list? Lesley Livingston first and foremost, although if walked into her I’d feel so awful and probably get really awkward and fan-girl. That woman’s writing is some of the best. I already know C.C. Hunter personally, so if I walked into her we’d end up laughing and trying to figure out if it was my fault or hers. I met Jennifer L. Armentrout last year in person, but we didn’t walk INTO each other, but boy I was star struck. Maybe Josephine Angelini who wrote the STARCROSSED series. Another one where Greek mythology plays a huge role and one I definitely admire.

7. What’s the worst piece of advice Jason could give to Laney at the beginning of the book?

Hang out and party with Ares. That dude is temperamental and hates him and doesn’t have much use for Laney, either.

8. Laney and Jason have to stop a goddess from destroying their worlds. If you were bent on world domination, what would your new title be if you won?

I don’t know. World domination sounds exhausting. I think I’ll stick with being a writer.

9. If your characters were going to make a pitch for you to become Immortal, what would they say to convince the powers to be to let you live forever?

Jason would probably argue the case that I had to write down more about how awesome he is and what a great guy he is and how much he loves Laney. Laney would tell them she needed help keeping the “cocky b******” in check (yes, that’s what she calls him throughout the series!)

10. If you had to change Laney’s name to your middle name, how do you think that would have changed the story?

My middle name is more French than Greek, so I’d have to look into French mythology, since I don’t know very much about it. I’d probably have to rename Jason something like Jacques or Jean or something like that. I don’t know if the French even have an equivalent for “Jason”.

And be sure to catch her live interview replay on our Facebook Live or above!

Have an author you want to see put through their paces with one of my quirky interviews? Let me know in the comments below AND be sure to tell me which of these answers from Bethany was your favorite!